You are here: Home / Home Cooking / Bacon and Cheese Hashbrowns with Baked Eggs 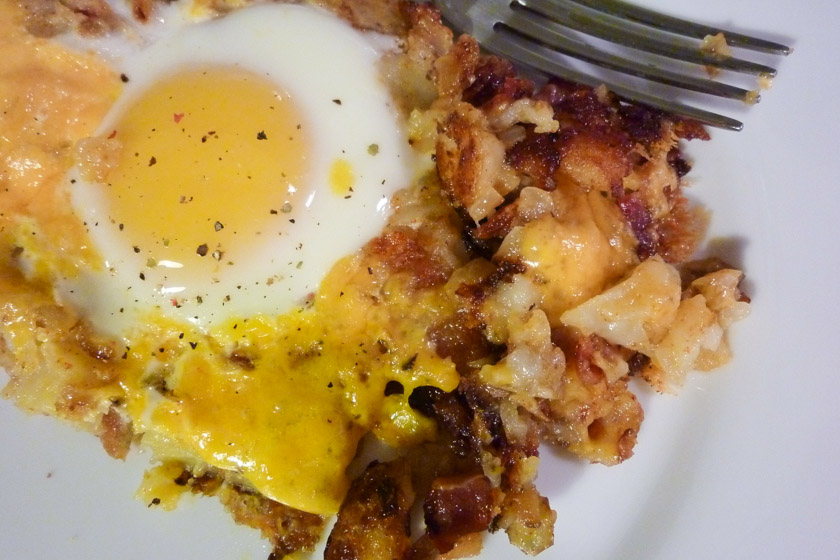 A recent visit from my parents brought with it a 5-pound bag of  salt potatoes.  This is a ubiquitous Central New York taste of summer:  new potatoes boiled in water so salty that the steam crystallizes on anything it touches, and drenched in butter.  And yes, it’s as delicious as it sounds.

A bag of Hinerwadel’s Famous Original Salt Potatoes comes with it’s own salt packet, which looked to be about a cup-and-a-half.  I felt a little like Tony Montana bouncing the flat sachet of white granules in my hand.  Street value?  About thirteen cents.  You cock-a-roach!

I boiled the entire bag a couple of nights ago, and now have a shitload[1. Not an official unit recognized by the Department of Weights and Measures] of salty, tender new potatoes  at the ready.  Dinner for breakfast, anyone?

This dish is a riff on the “cheesy hash brown” dish from Bobby Flay’s “Brunch @ Bobby’s”.  With the potatoes already boiled, this came together in no time (using one pan, no less).

And it goes a little somethin’ like this…(hit it!)

Print
Bacon and Cheese Hashbrowns with Baked Eggs
What's In It
How To Do It
3.2.1275

And there you have it!  Split this between two dishes — careful not to break the yolk —  and serve immediately.  I added a half-grind of fresh black pepper and a couple of dashes of Frank’s Red Hot to make it juuuuust right.