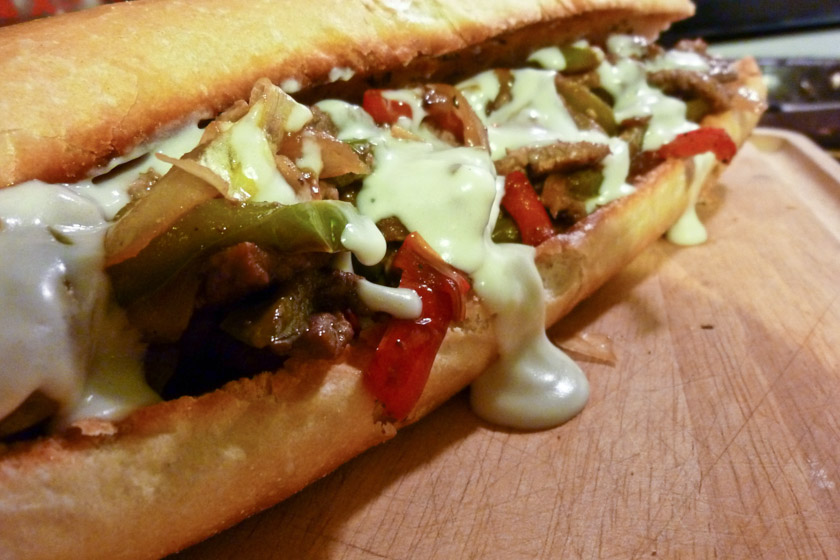 The dishes I prepare largely revolve around meat. As you keep coming back, you’ll see that.  My mind just doesn’t consider delicate greens when dreaming of dishes, and my use of produce is generally unsophisticated.  I’m working toward making veggies less of an “oh, yeah” afterthought.  Well, I WILL BE…I can’t say that I’ve started in earnest.

For now, a typical example for including vegetables as a co-star in a main dish is the caramelized onion and pepper in a cheesesteak.

For the gorgonzola sauce:

Sauté the onions and peppers in a large skillet, flipping to coat with butter and over LOW heat for about 20-30 minutes.  Emphasis on the low heat:  torching them on high will not give you the sweet, silky results you’re looking for.  Transfer the peppers and onions to a bowl, add the seasoned beef to the pan, crank the heat, and sauté until almost cooked through.  (I added a couple of dashes of Worcestershire sauce.)  Add the veggies to the pan and mix with the beef.

While the meat is cooking, rock your sauce: melt the butter in a saucepan over high heat and whisk in the flour.  Adding cold milk may give you a lumpy sauce, so heat it up before pouring it into the roux. As the mixture begins to thicken, stir in the crumbled cheese and cook it until the cheese melts and the sauce reaches your desired thickness.  If it’s too thin, cook it down some more.  If it’s too thick, add some more milk.

If you’re inclined to do so, grill or toast your roll.  I spread a foot of split baguette with herb butter and toasted it under the broiler for 5 minutes, which gave each bite a hint of thyme and rosemary, along with a satisfying crunch to complement the tender fillings.  Add the meat mixture to the roll and pour the cheese sauce over the top.

And enjoy it with a side salad of frisée and mint!  Okay, I had cheddar and sour cream chips with mine.