You are here: Home / In Search Of... / Black and Whites: Omonia Next Door 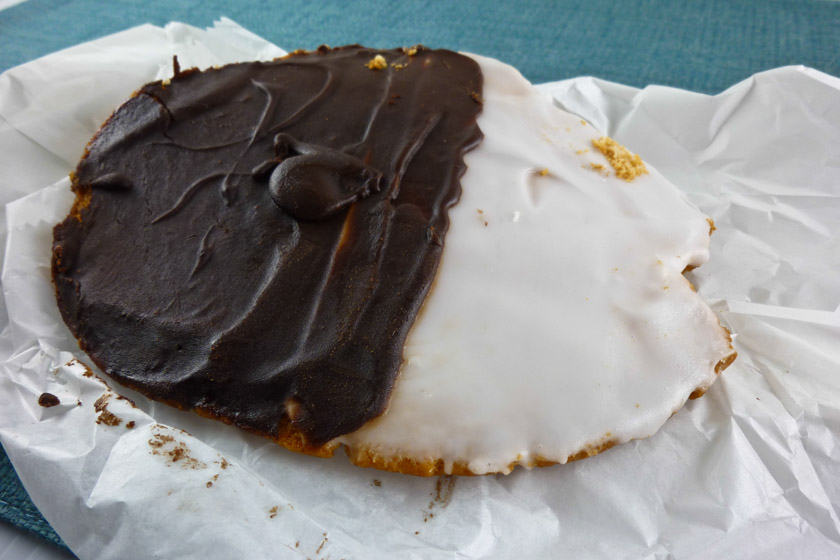 I’d been hopeful for a while that the Omonia Cafe Patisserie would add black and whites to its impressive array of desserts.  But maybe it was too simple to join the shelves of complicated strawberry-glazed cakes and chocolate-dipped cookies.

But as autumn turned to winter, a sign appeared in the window of the defunct Greek deli next door that a new Omonia enterprise was on its way with an “extended” line of products.  Hmm…could the black and white be among them? 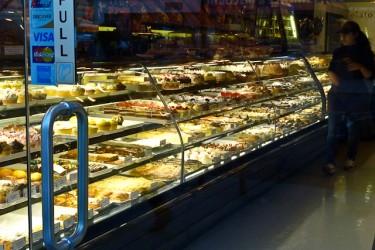 I walk by the location on my way to the train everyday, and was easily able to keep an eye on the progress of renovations.  Finally, a grand opening date was posted for the literally if not cleverly named Omonia Next Door. Months of wondering would soon be answered.

I peeked in two days after the opening.  The display cases glow in the dimly lit space and even before walking through the front door, I spotted the telltale two-tone coloring.  I saw as I approached that instead of perfect discs, every cookie on the tray was a  misshapen splatter of batter.  Now, I don’t subscribe to the notion that food needs to be pretty to be delicious, but flanked by trays neatly packed with treats perfectly produced with assembly line precision, the rough appearance of the black and whites seemed out-of-place.  The top of the cookie I purchased was shaped roughly like the Millennium Falcon.  And that was probably the most positive part of the experience. 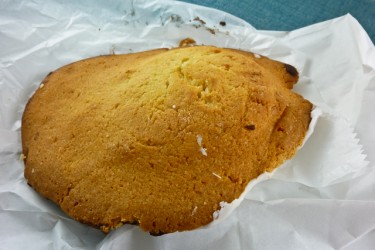 My black and white had a goiter.

The bottom bulged to one side — as if the baking tray was jolted before the batter had set — which resulted in uneven baking and thin edges that were a little well-done.  The icing seemed hastily applied and definitely spread too thinly in spots, exposing the crown of the cookie through translucent vanilla.

But looks aren’t everything, so I was still hopeful that months of anticipation wouldn’t fall flat.  Unfortunately, the flavor and texture of the cookie were even more disappointing than its hunchback appearance.  And so, its failure was complete.  (Let it be known that I have nothing personally against hunchbacks.  Look at Quasimodo or Big Man on Campus…solid fellas.)

The base was dense, dry and brittle, much more “cookie” than “cakey”.  The vanilla icing — what there was of it — provided a satisfying sweetness, but the chocolate was almost flavor-neutral and had more presence as texture than flavor.  The CHOCOLATE!  (I die inside a little bit to think about it.)  Each bite was too much cookie, not enough icing.