You are here: Home / In Search Of... / Half-Moons: The Backstory 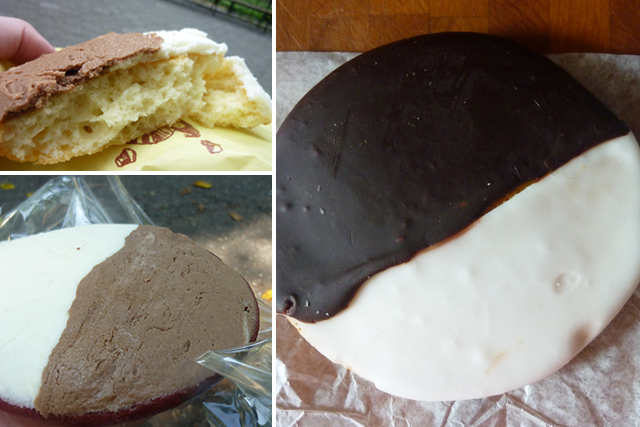 With hindsight, maybe it was just a typical diner.  But as a child, Dan-Dee Donuts was a weekend family destination. It wasn’t the type of greasy spoon that left you reeking of fried lard and required a change of clothes upon returning home. Dan-Dee’s was essentially a bakery with a large griddle, serving no-frills fare to its regulars.

There was nothing especially kid-friendly about the layout of the place: a gumball machine near the entrance, and a Popeye arcade game against the back wall were the only items that might draw a child’s attention.

But more than twenty-five years later, I can still picture walking through the front doors and seeing the waitresses in their yellow uniforms and white aprons circulating among the tables, double-fisting pots of coffee to offer refills to old-timers in faded flannel jackets and work boots, the brims of their trucker hats pushed high atop their gray heads.

I hear the squeaks and groans of loose seat tops on chrome stools at the counter, the hiss of sugar pouring from dispensers, and the clinks of spoons stirring ceramic cups followed by the fading reverb of the spoon settling on the countertop.

My father would read the newspaper, turning and folding pages over a buttered roll and black coffee.  I would mimic the action, turning over the weekend funny papers and sipping my hot chocolate.

But of all the eggs, hash, rolls, donuts and loaves the space churned out, my unwavering loyalty was reserved for a single item: the chocolate Half-Moon cookie. 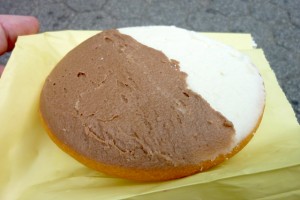 A frosted black and white from Crumbs

Known elsewhere as the Black and White, the Half-Moon has a round, flat spongy cake base and is capped with chocolate icing on one half and vanilla on the other.  However, unlike New York City’s fondant-topped Black and White variation, the Central New York native Half-Moon is iced with chocolate fudge and vanilla buttercream.  JUST what an eight-year-old needs at nine o’clock in the morning!

I enjoyed every moment, bending and breaking off small pieces from the cookie, never biting from the cookie itself.  I would eat two in a sitting with a big glass of cold milk, savoring the final bite as much as the very first.  When I was done, I’d use my index finger to corral any last crumbs on the bakery paper, pressing down to stick them to my finger and enjoy one final taste.

As years passed, sports replaced my Saturday morning routine of cartoons and Half-Moons: practice trumped pastry.  Dan-Dee Donuts eventually shut down, and my obsession faded.  But after moving to New York City I began to see Black and Whites everywhere, and I knew that I had to have them.

While I am thrilled to live where this delight from my childhood is so readily available, I am often disappointed by the pervasive poor quality.  Cheap versions line the shelves of bodegas and delis, sweating inside their individual cellophane wrappers and topped with rigid icing that cracks like a windshield when breaking pieces off. These are an affront!

My mission is clear:  to search the greatest city in the world for a Black and White that can replicate the sweet satisfaction of Dan-Dee’s cookies.  After all, if I can easily find a gong or a bear costume to purchase on a Tuesday at 11am, why not a quality Half-Moon cookie?