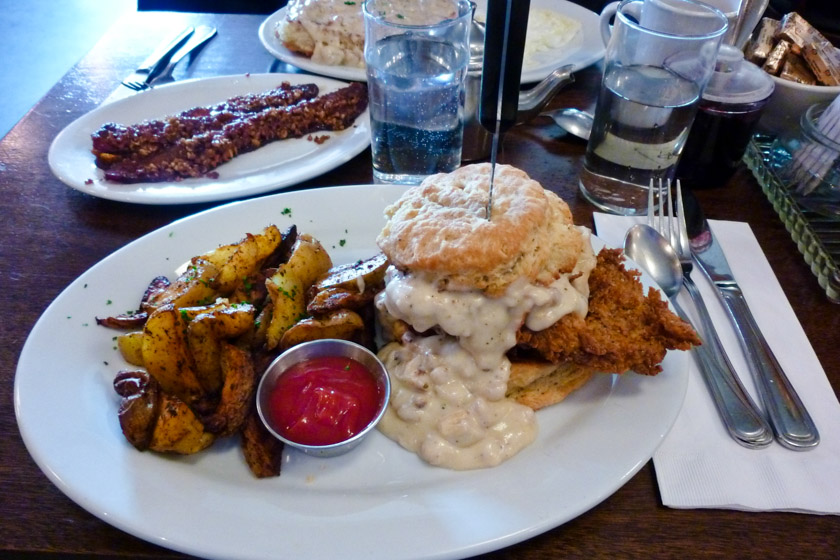 I am not a big breakfast guy.  I like to sleep in as late as I can, and I wake up slowly and with little grace.  During the week, this usually results in rushed mornings to get out the door for work, and the “most important meal of the day” goes wanting.  But even when time permits, breakfast doesn’t occur to me.  I am just not hungry that early in the morning.  And I really like to eat.

And while planning a scouting trip to Portland and Seattle one night — the Cooking Channel providing a background soundtrack — images from Unique Eats flickered across the screen, stopping Shan and I in our itinerary-making tracks: six-inch stacks of fried chicken breast piled atop sweet-potato waffles, caramelized bananas foster french toast and fried chicken sandwiched within biscuits and gravy.  Yowza!

Backing up the DVR to catch the beginning of the segment revealed fantastic news: the restaurant was in Portland!  The plan for our Portland Sunday plan. 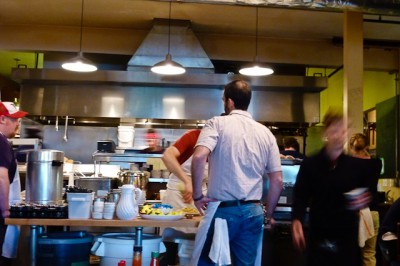 Almost every review I read of Screen Door mentioned an hour-plus wait on the weekends, so Shan and I planned an early arrival.  Thirty-minutes before opening at 9am, a line of two-dozen hungry patrons had already queued at the entrance.  This is clearly an operation that is used to accelerating from zero-to-sixty as soon as the front door is thrown open.  Hostesses filled the dining space swiftly.  We were in line early enough to be among the first to be seated.  Customers left standing are treated to complimentary coffee, or one of a handful of seats at the bar for a breakfast cocktail.

An open kitchen looks upon the dining room. Servers hustle in and out while carrying plated skyscrapers of heapin’ helpin’s in each hand and balancing more along their forearms. I grinned like an idiot as our waitress laid the platter before me.  A spicy fried chicken breast roughly the size of my hand lay smothered in sausage gravy within a huge buttermilk biscuit speared with a steak knife.  This is a big plate. Visions of John Candy’s Old ’96er scene from The Great Outdoors popped to mind as I stared at my meal.  Wait…am I sweating???

Shaking off the images of fictional gluttony past, I concentrated on the gluttonous immediate future.  I closed my eyes and filled my nostrils with the salty aroma of the gravy.  The buttermilk battered chicken crackled when pierced with fork and knife, and gave way to perfectly tender breast meet.  Each bite was a glorious combination of pillowy biscuit, warm velvet sausage gravy and crunchy spiced chicken breast. 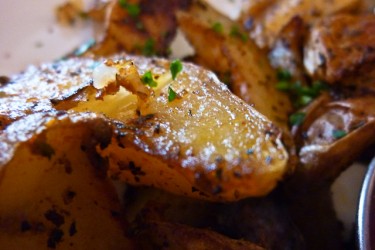 The potatoes were an afterthought when I chose them over grits as a companion, but were a pitch perfect take on home fries.  I didn’t venture to the starch side of my plate until I was about a third of the way through my biscuit sandwich, but realized that I was approaching now-or-never territory to try them out.  The crispy exterior is well-spiced with a peppery zing that is a great complement to the tender center.

Anyone that can actually finish the whole of what he or she is served here would be worthy of their name engraved on a plaque affixed to the corner of the dining room.  When the carnage was over, half of my potatoes lay untouched.  BUT, while scraps of biscuit remained behind, I made a point to finish the chicken.  What’s worse than wasted fried chicken?  And even after polishing off a potent portion, I didn’t feel make-it-stop full afterward.

Sure, I was walking a little more slowly and perhaps enjoying more frequent deep sighs than normal as we left, but I was also on vacation.  That’s what you do: eat well, slow down and enjoy the good life. Even if that means eating at 9am.