You are here: Home / In Search Of... / Hemstrought Bakery’s Chocolate Half-Moon Cookie Recipe 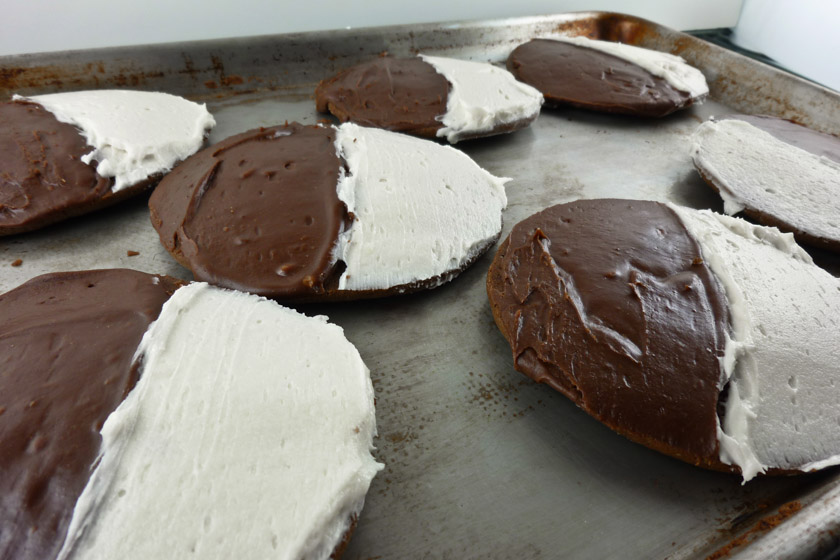 Hoo boy! It’s been a while since I’ve stepped to the mic. Things have been a little hairy on this end lately between work (freelance on top of 9-to-5), parenting and a trip to the Pacific Northwest (posts of our scouting trip/food tour to come).

But I’m back in the house, and I bring you the O.G. half-moon cookie recipe from Hemstrought’s Bakery. To wit:

“Half-Moons originated in Utica, NY at the famous Hemstrought’s Bakery in the early part of the 20th century.” (The ever-dependable Wikipedia)

This was most likely the cookie served at Dan-Dee Donuts when I was a kid, so no exploration could be complete without a shot at making these at home.

Saveur magazine published the recipe in 2000.

I started the process at 8pm on a Saturday night.  Do yourself a favor: begin much, much earlier in the day.  Yes, Saveur classifies the recipe as “easy”, and while definitely not super-complicated, making a batch of these cookies is involved.

And messy.  But then again, I am a novice volume-baker.  And since the 30-yield recipe posted by Saveur was already an adaptation of a version that produces 2,400 cookies, I didn’t want to re-adapt it for a still smaller batch.  It was too late at night to do the math.  Besides, like sea turtle hatchlings scurrying to water, I knew that not every cookie was going to make it intact from Silpat to cooling rack, so having extras couldn’t be a bad thing. 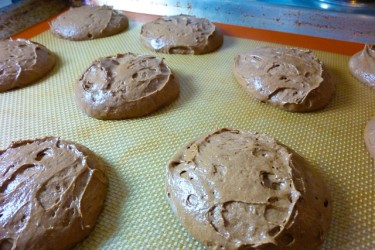 The standard black and whites I see around the City have a vanilla cookie base.  That’s a shame.  Chocolate is the foundation of a Central New York half-moon cookie.  After sifting and mixing, beating and scooping, the batter mousse-like in density and appearance.  Sure, the batter doesn’t look so appetizing coming out of the ice cream scooper, but 12 minutes in the oven creates magic.

My stand mixer received a workout. Its motor whirred and body rocked from side to side while first mixing the batter and then the buttercream frosting.  Plumes of confectioners’ sugar billowed from the bowl while mixing the latter, dusting the countertop.  The confectioners’ sugar was the ingredient that stood out most to me when making my shopping list, mainly because the fudge and buttercream icings combined to call for over eleven cups of it.  But…MMMAN, was the buttercream good!

Once the cookies were baked, and the buttercream mixed, I fired up the (makeshift) double-boiler for the fudge icing.  I’ve done chocolate-covered fruit before, so the technique wasn’t entirely new to me, but there was a moment when I freaked, thinking my melted chocolate had seized beyond salvation.  A few tablespoons of water brought us back from DefCon 1. 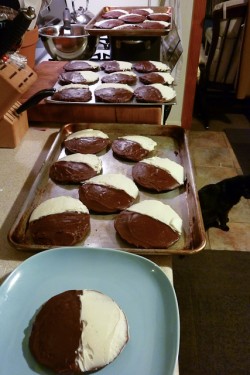 Okay, so we’re now past 11pm, and I haven’t even begun icing (let alone cleaning up).  I started frosting the two-dozen cookies fudge side first.  So, to keep the fudge spreadable, the mixture remains on the double boiler.  I held each cookie aloft in my left hand while spreading the fudge over half of the cookie with a frosting spatula in my right.  And yes, I dripped molten lava fudge on the fingers of my left hand.  Repeatedly.

By the time I was ready for a second pass, armed this time with buttercream, the fudge had cooled and set to form a bit of a shell on the cookies.  The vanilla was much less dangerous, and honestly made me a little gitty to apply.  It was happening!  My counters overflowed with THE cookie I hadn’t eaten in twenty-five years.

So, I ate half-moons for a week and a half.  And it was a delight!  Almost like a ragù, a couple of days of settling actually seemed to enhance the flavor and composition of the cookies.  The time certainly made them more stable for one-handed eating.

But yeah, it was a LOT.  I thought about bringing them to work the following Monday, and then I thought: “Nah.”  Maybe next time.

I’m a little half-mooned out, and it’ll be a little while before I get back on that horse.  But for a glorious ten-day stretch, pounding half-moons and pint glasses of cold milk transported me to an earlier age.  All that was missing was the USA Cartoon Express. 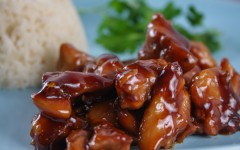 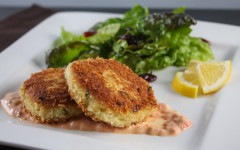 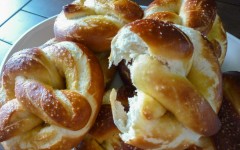